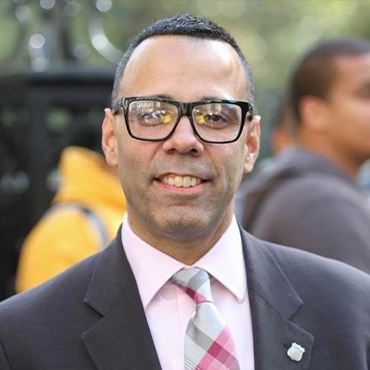 Angel Castro began his career in October 1997 as a Correction Officer at the Otis Bantum Correction Center (O.B.C.C.). Angel spent 17 out of his 23 years at this facility. During his first assignment, he immediately took the reins of one of the toughest units known to Rikers Island the Central Punitive Segregation Unit also known as the “Bing”. At the time he was brought on, it had just undergone a mass expansion to house up to 400 inmates. It was there that he learned the importance of teamwork. Angel is a firm believer that “with unity amongst fellow officers, you can face anything”.

During Angel’s tenure he also had the honor to work with the Ceremonial Unit and Search Team where he was fully committed to embedding the spirit of a true Correction Officer and leader. As a 23-year veteran, his various roles helped to prepare Angel for his role with COBA, working in an environment that requires unmatched dedication and constant multitasking. It enabled him to be adept at report writing, understanding Rules and Regulations, and being able to communicate with all types of individuals in stressful situations. Angel used his hands-on experience to help guide other officers along their career path.

It wasn’t until 2008 that Angel was first elected as a Delegate. He was then honored to serve again after being reelected for a second term in 2012. This position was subsequently followed by his appointment as the head of the Rapid Response Delegates in 2013. It was also at this time he was transferred to work at the Chief of Security/OSIU.

In January 2015 Angel was appointed to the Executive Board of Trustees as the At Large Delegate. In June 2016, he was elected to his most recent position and currently serves as the Manhattan Borough Trustee. In this role, Angel currently oversees OBCC, NIC, CID, West Facility and FMRD. He also acts as an OATH representative. Previously he has also overseen the Transportation Division, EMTC and GMDC and was the COBA liaison to the Board of Corrections.